The Particle Editor is used to create Particle Systems to be used in maps or entities.

A lot of values in this editor have both a min and max. This means that when the value is set to a particle a value between min and max is randomly selected.

Fading can be used to fade in and/or out some property like size or colour. The fading works like this. There are three relative values that are relative to the start value of the particle. The names for these values are start, middle and end and are used in that order. There are also two times that are relative to the life of the particle, for example if a particle has 2 seconds life time and the middle time is 0.5 then this occurs after 1 second (0.5 * 2). The first time is called start time and this is when the start value is entirely faded from start to middle. The middle length is how long the middle value lasts. After middle time + middle length the middle value is faded to the end value.

When run, the first screen we get to see is like this: 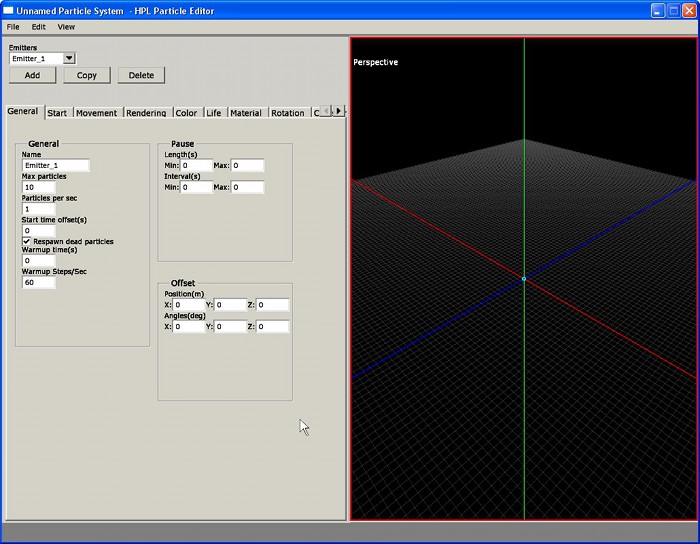 Each part of the screen has a specific function described in the following sections.

This is a menu bar, just like in any other windowed application. Available options for this particular editor are as follows:

When a particle emitter is selected, all its parameters will be shown in the tab frame below.

Note: The speed of box and sphere velocity is only the initial velocity which lasts about a 10th of a second. The maximum speed of acceleration is the speed that is achieved afterward. If the initial speed is much higher than the acceleration max speed, the particle will start out very quick and then slow down instantaneously to the accel max speed, which can be used as a good effect. [Confirm]

NOTE: all of the color channels have values from 0 -1.

Particles will be selected from the inside of the purple rectangles.