This window can be used to group objects in a way that you can further control them, as in for example building a room and grouping all the room components in a group called "room".

An object can belong to only one group at a time. Initially, all objects belong to the "None" group, which is a default dummy one. 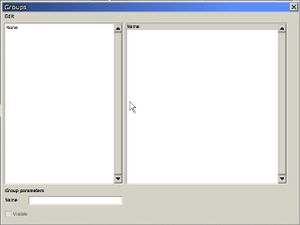 The window has a menu bar and several inputs: