When you're writing your program, you can find yourself ending up with a lot of code. If all this code is inside a single file, that can make things difficult to manage - whenever you want to add or change something, you have to pour through hundreds or thousands of lines of code looking for that one spot. Also, what if you want to use some code that was written by someone else? Do you just copy their code and paste it into your own? What if they update their code, forcing you to find everywhere in your code that was updated and perform the update yourself?

As I'm sure you've surmised by now, there's an easier way. There's a special keyword that references a script file and "pastes" it on top of another file. This allows functions and other things to be called from that other file without requiring that the code is in the same place - the include keyword:

A restriction of the include statement is that it must be placed at the top of a file. If you had the following code:

This code would result in an error, because the include statement is not at the top of a file.

The # before the include keyword is required whenever using an include statement. That is because an include statement is a special kind of statement called a pragma. Instead of working with the program while it is running, a pragma tells the compiler to do a certain task when the script is getting ready to run for the first time. In this case, the include pragma tells the compiler to include references to stuff inside another file so it can be called from the calling file, something that would be much harder to do once the program was already running.

A thing to note about the path that you put inside the quotes. When HPL3 gathers all of its assets, it stores them in a handy reference table where they can be referenced using any part of their path. For example, if you had a file at script/utility/props/omnitool/omnitool_code.hps, you could include it using any of the following lines:

Each of those include statements will work in the exact same way. Simplicity would state that you can just do the first line, while a desire to be explicitly specific would say that you should do the last line. The general advice as to which one you should use is to use the shortest one that illustrates the intent of that script. For example, you can use omnitool/omnitool_code.hps to illustrate that it is a group of code intended to work on the Omnitool, or you could use props/omnitool/omnitool_code.hps if there are other scripts from the "props" folder you will be importing as well. (You should almost never use the shortest option unless the name of the file itself is enough description.)

The ability to group code from different files together is incredibly useful for keeping your code clean and organized. However, there arises a problem. What if you have two files that look something like this?

We have two Add functions in two different scripts, and one does something different than the other. However, if we include both of these script files into a third script file, it will throw an error, because the function signatures are the same. (Remember when I talked about function overloading in Lesson 5?)

We need to be able to resolve this conflict. The simplest way would be to rename the functions themselves to something like AddA and AddB, but that can be tedious and lead to poorly-maintained code. What we need instead is a way to differentiate these two functions based on the purposes they exist for.

As it turns out, there's a keyword for just such an occasion: namespace:

Now let's see how to access these functions. As it turns out, you do it with a new operator called the scoping operator:

One neat thing you can do with namespaces is that you can nest them as well:

When referring to nested namespaces, you simply just chain together scoping operators to get to the function you want:

You may have noticed that in this previous example, I had a third Add function as well, outside either of the namespaces. If you want to access that one, you can do it by using the scoping operator to reference the global namespace, which everything is implicitly part of. You can do this by just having the :: before the name without a namespace identifier:

When dealing with namespaces, it's important to understand the concept of scope. Scope talks about the visibility of things like functions and variables, and it determines what other code can see and access them. For example, say we had the following code:

(Ignore the infinite loop potential in this code for a moment.)

Inside DoOtherWork, the DoWork function gets called, which is perfectly fine. In turn, DoWork calls DoOtherWork. This, however, is not fine, because DoOtherWork is outside of DoWorks scope.

Take this visual representation, for example: 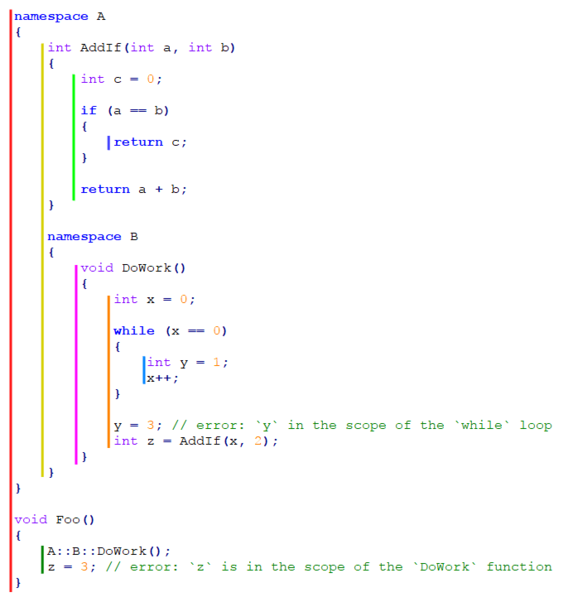 The colored lines represent levels of scope. Anything can access anything else as long as the place calling it shares all the same colors as the thing being called. For example, DoWork in namespace B can access AddIf in namespace A because DoWork exists in that scope (AddIf has the scope colors red and yellow, which DoWork also has). However, the opposite is not true - AddIf would not be able to call DoWork because DoWork is in a higher scope (DoWork has the scope colors red, yellow, and magenta, but AddIf does not have magenta in its colors).

There are also some errors in this image. In the DoWork function, the y variable is declared within the while loop. The function then tries to assign a value to y once the loop is done, but this is not allowed, because y exists in the scope of the loop and cannot be accessed outside of it. Similarly, in Foo, the function tries to access the z variable of the DoWork function, which is so far outside its scope as to be just silly.

When referring to how "high" of a scope something has, think of the above image as though it were laying on its side with the colors going up like pyramids. Colors that are "higher up" on the pyramid are referred to as having a higher scope. Just remember that when it comes to scopes, higher means more limited.
AngelScript Fundamentals
← Chapter 6 - Functions
Chapter 8 - Classes →
Retrieved from "https://wiki.frictionalgames.com/page?title=HPL3/Scripting/AngelScript_Fundamentals/Chapter_7_-_Calling_Other_Scripts&oldid=4590"
Categories: