The debug menu is where most of the work happens. There, you can find a list of useful actions which will help you in your mod development.

This section is at the very top of the menu and consists of checkboxes which display different information about the game, map, physics, script, etc on in the form of text on the screen.

This button prints container debug info to the screen.

This feature doesn't seem to be useful in practice.

The map section of the menu includes settings and actions which are related to maps in general, as well as the currently-loaded map.

This makes the map reload resources (mostly game assets) automatically, should you change or add something to the mod.

The script file for the map will be updated when a task switch has been performed. Meaning, as long as you do not go back to the game after changing the script, the new script won't be updated in the game.

The script file for the map will be updated constantly every time it is saved. It doesn't matter if the game task is focused or not.

Leftover feature from HPL2. The button does not work.

When reloading a map, the player will retain the current position instead of starting at the beginning of the map.

Reloads the map. This also resets the state of the player and all the other scripts which run in the background.

Script Debug enables further scripting features that won't work otherwise, such as OnAction. It is also useful to make your map behave differently. In your map script file, you may want to change the behavior of your map depends if the script debug is enabled or not. For example:

Teleports the player to a specific PlayerStart Area that can be selected from the dropdown list. Useful for skipping areas in a map.

Select a map file to load in the game. HPL3 Map File (.hpm) and HPL2 Map File (.map) are accepted.

Warning: Some things are almost guranteed to not load correctly when loading HPL2 map files, mostly related to issues with static-objects. This is due to the internal structure of the .map files and how it handles assets information.

Loads another map in the background so it can be loaded later much faster. Main article: Level Streaming

Loads the pre-loaded map. If no map has been pre-loaded, the button will do nothing.

Keeps the previous map loaded. This is useful if you want to go quickly switch between two maps.

Sets the priority of the map preload process. Ranges from paused to very high

The game section of the menu includes general-purposes option which affect how you play and move in the game. It also displays debug information such as scripting errors.

The Input section of the menu includes tools and option for capturing and analyzing user input.

This is a tool used to test the map under heavy performance conditions.

The misc section include options which don't fit anywhere else.

Debugging the graphic performance of a level is vital to understand which parts are causing the bottleneck. It can also be used to find bugged/incorrect meshes or entities. With this section of the debug menu, you will be able to find which parts of the scene take up the most performance.

This option displays on the screen a graph that shows FPS peaks on a time scale. It's useful for finding areas in a map that reduce FPS the most.

On the left, you can see what the player sees. On the right, the camera has been moved back and it is now possible to see all the objects that get rendered this frame. There are a lot more than what it looks like in the left picture. 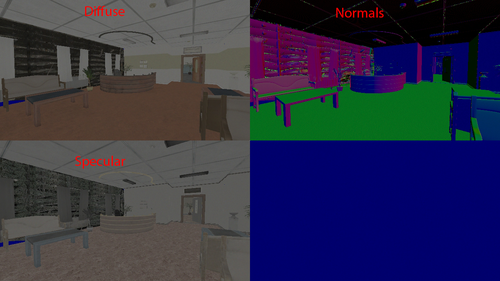 A scene in a g-buffer mode. Notice the different graphic modes.

Light complexity shows how expensive the lighting of a scene is. It creates a heat map on the screen to show how much power each light takes. Overdraw of light is not very expensive, it is about twice as expensive as a translucent object. When the light has a shadow map it becomes much more expensive. The complexity of a shadow casting light is based on how many draw calls and triangles are required to generate the shadow map.

The red areas on the right image are not good. There seem to be multiple large (in screen space) shadow casting lights in this scene.

Creates a heat map that shows how much translucent overdraw each pixel receives. Overdraw is how many times a pixel gets rendered to.[Clarify]
The goal should be that no part of the screen is red. It does not matter that much if only a small part is, however.

On the left you can see the scene rendered normally. The fog particles are barely visible here. On the right the pixel overdraw is rendered. The red areas show that more than 32 translucent planes are rendered, which is not good.
Retrieved from "https://wiki.frictionalgames.com/page?title=HPL3/SOMA/Modding/Developer_Debug_Menu&oldid=5402"
Categories: