Difference between revisions of "HPL3/Modding/Mod Dependencies"

Mod dependencies provide a solution sharing mod content across multiple other mods. A few mods could depend on a parent mod to derive assets and other content from, instead of including it in their own mod. 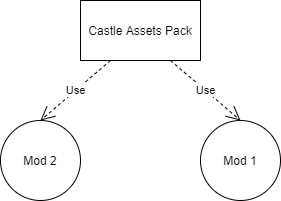 A simple diagram showing the process of a mod dependency. Several mods take resources from one source. Both mods can use the castle assets pack.