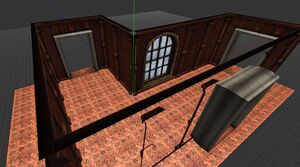 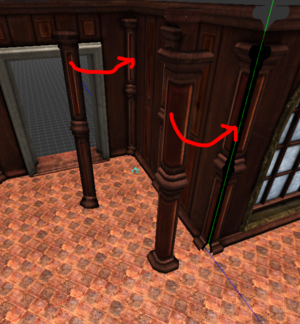 Particles are used for all sorts of effects and things floating in the air; flowing water, dust, fire... When it comes to mapping, we will be using ps_light_dust.ps (place it in front of the window) and ps_area_fog.ps (place it in the middle of the corridor every couple of meters). I made the dust particles quite dark (0.5) because they are too on-the-nose in my opinion; making them darker makes them less visible, and therefore, more subtle. You can see the light dust particle (the white dots) here:

Decals are textures which stick on models. They're mostly for diversifying repetitive textures and various other effects. Some of them have a static_object versions. E.g, I'm using this static object decal for spilled wine:

And one of my favourite decals - dirt_stain_large.mat - to fill the empty space on the floor and on the walls. Make sure to set the color to white, but change the alpha setting to a low one (I used 0.3 here). Otherwise the decal will just look too on-the-nose (ugly, if you will). Then I basically slap it here and there with the random settings on:

You can't see them clearly, but that's the point - they shouldn't be noticable at first sight, but they will still diversify the repetitive textures. Here's where I placed them: